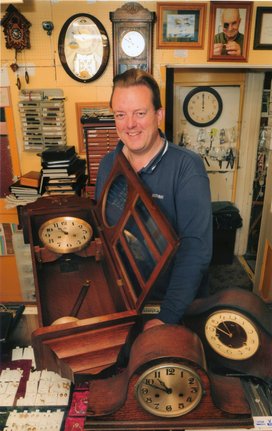 "Wightime is run by me, Andrew, and my Wife, Donna, in Freshwater, Isle of Wight, as part of the larger family business of F. Robert Frise Jewellers."

"In 1985 I began working in the family business on Saturdays and during school holidays. My Grandfather tutored me on clock repairs via an invaluable "hands on" approach starting with our wealth of "scrap" clock movements and, when fully able to undertake the routine work, I moved on to customer's clocks - and have never looked back." 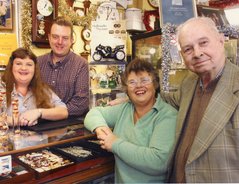 Wightime is run by me, Andrew, and my Wife, Donna, in Freshwater, Isle of Wight, as part of a larger family enterprise.

Having been brought up in the environment of a traditional family run business it was only natural that I became a part of it when at the right age.

The business, F.Robert Frise, a village Watchmaker/Clockmaker/Jeweller, was established in May 1952 by my Grandfather in Station Road (now School Green Road), Freshwater, Isle of Wight. (see also www.frobetfrisejewellers.com)

In the early 1960s the business moved to its present day location in High Street, Freshwater.

In 2010, and at the age of 93, my Grandfather was still working at his bench daily, underaking the most intricate of watch and jewellery repairs.  A series of falls ended his working career and he sadly passed away aged 94 in December 2010. My Mum (Mr Frise's daughter - Heather Cooke) began working in the business after leaving her job at the Saunders Roe Rocket Testing Facility at Highdown above Alum Bay in the late 1960s. Starting on just £1 a week, Heather ran the shop part time until the mid 1980s when it became necessary for her to run the shop full time. As well as the shop work, Heather also offered an engraving service (free engraving on all items & Sports Trophies bought on the premises) and, until around 2002, carried out earpiercing too. After a few periods of ill health, Mum passed away suddenly in July 2015, leaving the family business in the hands of Donna & I. Donna now provides the engraving service. (on metal plates/ trophies/glassware etc)

In 1985 I began working in the family business on Saturdays and during school holidays. My Grandfather tutored me on clock repairs via an invaluable "hands on" approach starting with our wealth of "scrap" clock movements and, when fully able to undertake the routine work, I moved on to customer's clocks - and have never looked back.

I concluded my High School/Sixth Form education in 1990 having achieved a series of CSEs,  O Levels, GCSEs, A Levels & A/S Levels and in September of that year I became self-employed as A.S Cooke Clock Repairs. I have continued working beside my Mum and Grandfather at the family business premises ever since.

In 2000 good fortune steered me to meet Donna and we were married in 2006. I am very pleased to say that she has a natural enthusiasm for the business and joined me here full time in late 2015 having undertaken shop associated tasks and the adminstration duties since 2003.

Donna also accompanies me on house calls, collections and deliveries and is an invaluable extra pair of hands!

Almost twenty years after becoming a full time Horologist I decided to simplify the name of my part of the family business and WIGHTIME was born. The name relates to the beautiful Island on which I was born and raised as well as being a play on words from the well known question "Have you got the right time?" So, have you got the WIGHTIME?

As a contrast to my chosen career, when not working I spend much of my spare time as a cruise and ferry/shipping writer/photographer. This grew out of a love of travel, photography and the sea. Various spin-offs have come along including the book "Cruise Ships of the Solent" plus I also write for international ferry and shipping publications including Shipping Today & Yesterday, Ro-Pax and Ferry & Cruise Review.

In 2008-2010 the ideal opportunity presented itself to combine Wightime with the maritime activities when I overhauled the Smiths Astral Ships clocks from the Wightlink Lymington-Yarmouth ferries (installed when the vessels were new in 1973) and then brought them ashore into my care when the trio of ferries concluded their service careers. The task of installing the clocks on the new 2009 built replacement ships was completed early in 2010 once the last of a series of wooden fixing plinths had been obtained. So, Wightime delivers clocks on land and sea! 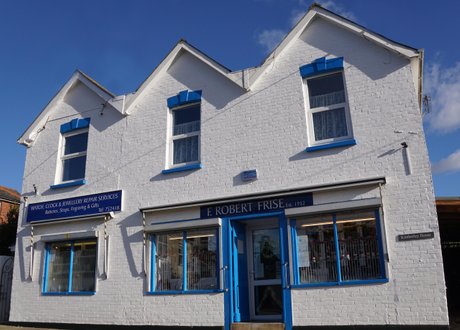 The home of Wightime in High Street, Freshwater,